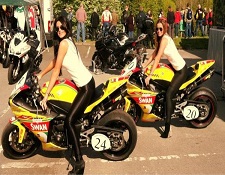 The Pitlane team have been providing Grid Girls, Promotional Models and Hostess at Donnington Park for over seven years with fantastic results.  All our girls look great in lycra and we don’t just hire pretty faces too, our ladies have personalities!

The British Superbike Championship also known as the BSB is the most prestigious racing superbike championship in the UK and commonly considered as one of the top super bike championships by the sport lovers. The series takes place over twelve rounds from April to October annually, with the series concluding in a three-round finale. In recent years 368,000 people have attended the BSB events across the country and 8,000,000 fans watched 310 hours of television.

Getting To Donnington Park

Donington Park is located right in the heart

of England, just minutes from M1 junction 23a junction 24 southbound. In addtion it is easily accessible internationally via East Midlands International Airport, only 2 miles away.
If you require any promotional event staff ranging from Grid Girls and Hostesses to flyering and data capture staff do not hesitate to call the Pitlane team on 0844 800 0071 for a fast and free quotation.